The sea offered her a song of bravery and love. It came from a long way away, as if someone somewhere in the world had sung it many years ago, for those on the shore who didn’t dare to take the plunge. 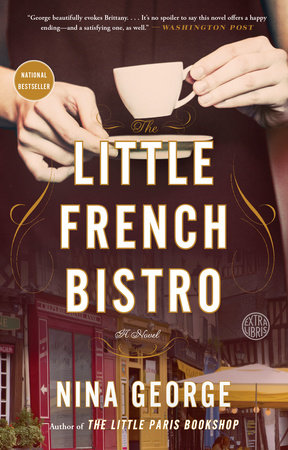 Marianne is stuck in a loveless, unhappy marriage. After forty-one years, she had reached her limit, and one evening in Paris she decides to take action. Following a dramatic moment on the banks of the Seine, Marianne leaves her life behind and sets out for the coast of Brittany, also known as “the end of the world.” Here, she meets a cast of colorful and unforgettable locals and learns it’s never too late to begin the search for what life should have been all along.

Earlier this month I turned 25 years old. To most, I’m still a little sapling of a person, but to me, I’m as old as I’ve ever been and as young as I’ll ever be. I’m old enough to be reflective of my youth, but young enough to realize I still have my whole life still ahead of me. It’s nice to be reminded that it’s never too late for new beginnings.

I’m not a stranger to Nina George’s work. A couple of months ago I listened to the audiobook of The Little Paris Bookshop and fell in love with the south of France and all the wonderful characters George created. When I discovered there was another book, The Little French Bistro, I was excited to return to France for another adventure.

George’s work is imbued with her love of France. It radiates off the page and pierces your heart. In The Little French Bistro, we are transported to Brittany, where George lives, and her passion for her home is clear on the page.

Besides a love of France, this books made me feel. Though Marianne and I are separated by age and distance (not to mention that she’s fictional), I felt deeply connected to her and was on the same emotional journey. When I turned the last page, I felt as if the journey had come to a satisfying conclusion and that we could part ways as better people.

My favourite thing about this book was the other-worldliness that permeated the story. Nothing paranormal happens, but there is a real-world magic in the ocean, the wind, and the people.

I’ve finished this book believing that it’s never too late to run away to the coast and become a white witch playing the accordion to the sea.